Liliana Mantione Lanaro “Lion-Mant” has created her personal
“Credo” dedicated to the Art: 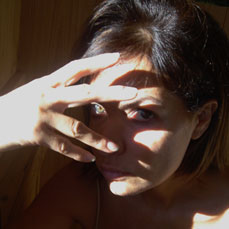 Liliana Mantione Lanaro “Lion Mant” was born in Caracas,
growed between Italy and Venezuela, she learned from her father, an
art teacher and painter, painting techniques, art history and last but
not least, humility that is necessary at every landing creative work.
She graduated from the Institute of Civil Aeronautics of Caracas;
works in the field of international air traffic for eight years, from
1978 to 1980 in “Air Panama Caracas”, as head of the Air
Traffic Departament, and from 1981 to 1986 in the airline
“Alitalia”-Caracas, a situation that gives her the
opportunity to travel in her free time and visit museums and
exhibitions in major capitals of the World. At the same time she
continues to paint to fill her needs to express through art feelings
and thoughts.
In 1986 she moved, following the professional needs of her husband, to
Cortina d’Ampezzo, in the heart of the Dolomites. She worked in
the eyewear industry and growed up her two beloved daughters. From the
close proximity with the magnificent nature of the place, she received
all the stimulation to create a neverending series of art works. She
definetively started working as paintress in 1989.
She continued travelling and realized various exhibitions. From 2005 to
2008, she spents long periods in Spain, where she studied some of her
main subjects, Eastern philosophy and metaphysics. In this period her
style of painting becomes Surreal/Symbolic.
Nowadays, she lives and paints in Cortina d’Ampezzo. Through her
works she try to awakes those messages that are part of the collective
unconscious, composing and decomposing, deleting and recreating with
energy, avoiding every boundaries gived by men on our Planet, through
the passage of light, giving life to a no-limits communication.
“Art is for me a constant work of Interiorizing and interacting in
a cognitive process between Physical/external and ethereal/invisible
through the spectra of light, proceeding in an infinite range of
Frequencies, here was born my works Material = Emptyness.
Her constant research takes her to experiment by 2012, a Multimodal
Art-Work, a totally new approach in cooperation with figures from the
world of software and music managed to create an artistic work of rare
and powerful depth:
“With this work, displayable only in individual events, we were
able to touch the hearts so deep, to arouse, always in a positive way,
an immediate change of frequencies in a large and important public,
that thrilled, praised resoundingly this unprecedented relationship
with the art.”
The first event “Lux Estrema”, gave birth to a canvas painted
in oils, bringing it to the moment of Genesis, spark that turns
through the motion of approach/departure and the hand gesture in an
accentuation-distortion of the work itself visually and soundly
without any physical contact, was performed in Trieste in May 2013.
The second event, “The Sound painted” , exposed in Cortina
d’Ampezzo in August 2013, allowed viewers to interact with every
subject of the opera, in Arcana, a non explanatory mode but evocative,
translated by creative time data messages by the artist, work that
sparked overwhelming reactions in every single spectator-participant.
Interactive jobs are visible only in part, due to their complexity,
through a series of videos displayed in the artist website.
Defined as “Paintress of light”. Her work has been described
as a surreal vision that becomes symbolic expression through revealing
indication of the light itself. Her paintings are visions of light
spectra of different entities and frequencies that through wave
movements, are able to maintain a constant during each Metamorphosis.
Liliana M.L. “Lion Mant” works were Exhibited in: Caracas,
Trieste, Cortina d’Ampezzo- “Royal Academy of London”-
Milano Art Gallery- “Biennale di Venezia 2015”- “Museo
Canova-Possagno Italy”- “Spoleto Festival dei due
Mondi”- “Biennale di Milano 2015” -“Villa
Castelnuovo-Palermo-Sicily” -” Museo Ferrari of
Maranello-Italy- Paris-France.
Some of her Art-Works are nowadays in Private-Collections in
Caracas-Venezuela, Cortina d’Ampezzo, Milano, Vicenza, Venice,
Sicily, Trieste, London, Bath-UK, Sydney-Autralia, Madrid-Spain.
Liliana Mantione Lanaro “Lion Mant” had received with Honour
the “International Marco Polo Prize to the Art 2015” in
Venice-Italy.
Many are the Critics that had wrote about Liliana Mantione Lanaro
“Lion Mant” Art-Works, from Elena Gollini to Professor
Vittorio Sgarbi that can be found in importants Art Books and
International Catalogues.